This month we have updates from Chapters, Celebrations, ACM-W India, and ACM-W Europe.   The report from our first New York City Celebration gives an overview of the event – I was there and can attest that it was a great event with tremendous enthusiasm.  It was clear that the participants (faculty, students, practitioners) were all excited to participate in an event of that kind.  The next week I was at NYCWiC, the upstate New York Celebration and I expect we’ll have a report on that in the June Connections.

Where’s ACM-W This Month?
Many ACM-W volunteers will be at the NCWIT Summit (probably while you are reading this!).  It will be a chance to meet with various of our volunteers and also confer with our NCWIT partners with whom we continue to work on the project to increase the number of ACM-W Chapters.  Wendy Powley (Celebrations) and Gloria Townsend (Chapters) will be blogging for Blog@CACM so keep an eye out for their posts.

Also around the time you receive this, I will be at the United Nations at the UN Women conference “A Call to Action for Gender Equality and Women’s Empowerment”.  Folks at Google (thank you Chris Stephenson) asked me to participate on a panel they have organized on “New Skills, More Choices: Access Through Education”.

I’ll also be representing ACM-W at the ACM Council meeting in a few weeks, and will have the pleasure of attending the ACM Awards Banquet where Jennifer Rexford will receive the Athena Lecturer Award.

The daylong event was hosted by Microsoft at the Microsoft Technology Center in Times Square, New York City, and was sponsored by Microsoft, Google, Verizon, NY Tech Meetup, and LiveCube.com.  Over 150 students, educators, and professionals attended the event.

Over 20 moderators and panelists spoke on the topics of career choices, entrepreneurship, and building a network for one’s career.  The day ended with a panel answering questions from attendees.  The consensus among the attendees, organizers, producers, and sponsors was that the event was very successful and planning for next year’s event is already underway.

Celebration season is coming to an end for this year with just one more event on the calendar (Valencia, Spain, in July).   It is time to start planning for 2016/2017.  If you are considering organizating an ACM-W Celebration in your location, please contact Wendy Powley (wendy@cs.queensu.ca) for more information.  We can help you get started!

As the 2015-2016 academic year draws to a close, we highlight the growth of ACM-W chapters (now 133) and encourage our readership to organize an ACM-W Chapter at each individual school or help a neighboring school to charter a chapter.

Great news:   There is available funding for starting new U.S.-based chapters because NCWIT has extended the Student Seed Fund deadline to May 31, 2016.From the NCWIT website: "Start-up Funding (up to $3,000): Students looking to start a new ACM-W chapter on campus can apply for funds to help launch their group."

More good news:  We have our first chapter in South America.   ACM-W welcomes Pontificia Universidad Javeriana ACM-W Student Chapter in Bogota, Colombia.  We hope to have an ACM-W Chapter in Australia soon, so we can celebrate a chapter in every (feasible) continent.

Hackathon Event for Women, HACKHER, was held on 21st April 2016 at Coimbatore.  This event was sponsored by ACM-W India and hosted by Amrita University.  The programme was conducted by GUVI, Chennai. 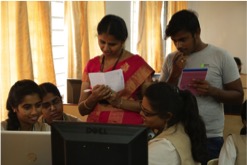 Forty teams registered and 29 teams, of three members each, participated in the event. The event was organized in the Department of Computer Science and Engineering (CSE), Amrita School of Engineering.  The event commenced with inauguration by Dr Latha Parameswaran, Professor and Chairperson of the Department of CSE.  Dr. Sheila Anand, Chair, ACM-W India addressed the participants and interacted with the teams. 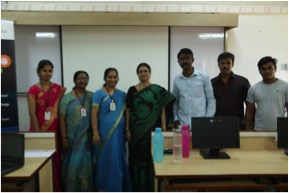 The first ever ACM-W Celebration of Women in Computing in Azerbaijan was held at ADA University on 30 April. Just two days before the university was hosting the UN-sponsored International Girls in ICT Day at which visitors were puzzled by the life-size figure of a Victorian age lady. There was a question hanging on the figure saying  “Do you know who she is? You may take her photo and image-search in Google or you may come here on Saturday, 30 April at 14:00”. Taking selfies and posing with her, not many recognized Ada Lovelace – the first programmer in the human history. Read more here .

The program committee of ACM-W Europe womENcourage 2016 announces that Lynda Hardman, a member of the management team at CWI (Centrum Wiskunde & Informatica) and Professor of Multimedia Discourse Interaction at Utrecht University will present the opening keynote address.  I was lucky enough to speak to Lynda about her planned presentation and her motivation for speaking.

what do you encourage students to attend womENcourage 2016?
While networking early in one’s career can feel like a waste of time, people you meet now can be very valuable in the future. The same goes for the people that you meet – they have you as a network contact for later. Also, everyone you meet at womENcourage is really interesting to talk to, whether about their research, their experiences as  women in computing or great chocolate cake!

what do you hope the attendees will take away from your talk?
That my research topic is fascinating and challenging, and that no career path is set in stone from the outset. I hope that this will motivate a new generation of researchers and provide inspiration for those who (will) work in industry?

Why is womENcourage important to you?
I find any gathering of technical or scientific women who study or work in male-dominated environments inspiring. The women are highly motivated and very good at what they do, otherwise they would not have come so far. Often, however, younger women are not conscious of the invisible barriers they may face later in their career. (This was also true for me when I was 25.) The event is an excellent area to explain why these barriers exist and how women can deal with them.

In addition, we are lucky to have another wonderful article where Lynda was recently interviewed about promoting women in science here.  In addition to her work at CWI and Utrecht, Lynda was named a Distinguished Scientist by the Association for Computing Machinery and she is president of Informatics Europe, whose mission is to foster the development of quality research and teaching in informatics.