These are exciting and busy times for ACM-W!  In addition to a high level of activity in our “regular” projects, we are pleased to have been able to support and endorse important efforts that will have a long term positive impact for women in computing.

ACM-W Joins International Gender Gap Project
The International Council for Science (https://www.icsu.org/) has launched a major initiative aimed at reducing the gender gap globally in the natural sciences, mathematics and computing.  ACM-W is now a participating partner in this important effort.  The three-year project – Gender Gap in Mathematical and Natural Sciences: How to Measure It, How to Reduce It? (https://icsugendergapinscience.org/) – will focus on generating sound data that will inform recommendations on best practices to encourage girls and young women around the world to study and work in these fields.  During November and December, three workshops are being held in Taiwan, Columbia, and South Africa to onboard participants and develop plans for achieving the main tasks of the project.  My thanks to our ACM-W volunteers who are attending the workshops – Catherine Lang, Aruquia Peixoto, and Laurence Maka.  Your efforts are much appreciated!

ACM-W Endorses “Code Like a Girl” Act
In July, Congresswoman Jacky Rosen (Nevada) introduced a bipartisan bill now known as the “Code Like a Girl Act” in the US House of Representatives.  ACM-W was pleased to endorse this bill, which, if funded, would make funding available via the National Science Foundation for research and programs that encourage early childhood education in STEM for girls under the age of 11.  A similar bill, also endorsed by ACM-W, is being discussed in the Senate.  In an update provided by Congresswoman Rosen’s office just this week, the act will be added as an amendment to a broader bill, “Building Blocks of STEM Act”.  It is anticipated that this integrated bill will pass out of Committee this week and hopefully soon make it on to the House floor for a vote.  You can learn more about this legislation and follow its progress via the following links:

Looking Ahead…
The December issue of Connections will unveil our latest project undertaking – not to be missed!

The event had participants from several regions of Chile, including a 20-person delegation from the city of Valdivia and was packed with several sessions. The morning focused on how to attract more women to STEM fields, with a keynote from Salomé Martínez, the first female full professor of the Mathematical Engineering Department at the University of Chile, followed by an interactive workshop about leadership. Several initiatives to attract more women to computer-related fields were presented. There was a discussion panel on this topic, led by Girls in Tech Chile, and Roxana Nahuelcura, science teacher at a local girls-only public high school who is known as the “teacher who trains scientists”.

The afternoon had a session of student presentations, in which each student had 5 minutes to present their work. A technical keynote was given by Cristina Cano (Universitat Oberta de Catalunya). There were several interesting presentations by academics and professionals on a variety of topics such as: Gender biases in Wikipedia, wearables, and how to teach engineering students how to communicate effectively. The event concluded with a social event and prizes were given out to the best student presentations.

We are excited to report the latest winners of our Networking Award. Congratulations to Clayton State University, Georgia State University, Uppsala University, Letterkenny Institute, and Techno India – Batanagar. And thanks to ACM-W Student Chapters Committee members Lindsay and Alan Jamieson, St. Mary’s College of Maryland, and Melanie Williamson, Bluegrass Community and Technical College, who administer the award. The deadline for the next round of awards will be Jan. 15.

We also want to remind you that there is still time to respond to our survey on chapter outreach programs. Each chapter that responds will receive a set of our new ACM-W stickers. These stickers were design by the very talented Rachel Chesley, a member of the ACM-W student chapter at UNCC. 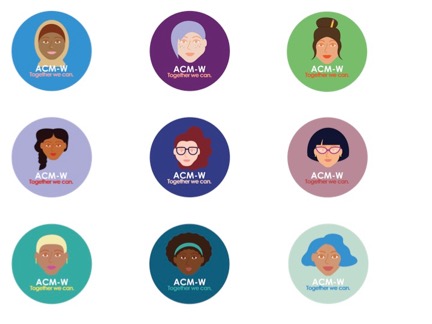 The ACM Scholarship for Attendance of Research Conferences program provides support for women students in Computer Science and related programs who wish to attend research conferences. The student does not have to present a paper at the conference to be eligible for a scholarship. Applications are evaluated at 6 occasions each year, to distribute awards across a range of conferences, with usually 3-6 awards given for each group of applications. The ACM Scholarships are made possible due to the generous support of Microsoft, Google and Oracle.

If the award is for attendance at one of the ACM special interest group conferences (SIG conferences), the SIG will most likely provide complementary conference registration and a mentor during the conference. The number of free registrations available varies from SIG to SIG. ACM-W has helped students attend a wide range of meetings including SIGGRAPH, SIGCHI, ICDIPC, Women in Cyber Security, ACM EC, SIGCSE, IEEE Conferences, DIS, IPDPS, ICCC, ACM CHI, AAMAS, FLAIRS, WIMS, CSCW, New Interfaces for Musical Expressions, GECCO, ICAPS, and ICSE, amongst others.

The scholarship exposes students to prominent researchers in their field, introduces students to new research, and excites them about doing research by themselves. We ask students to share with us some of their thoughts on the conference they attend, preferably with a picture, so that we can show our readers and funders the diversity of our winners. We never cease to find truly inspiring stories!

When we ask awardees to send us reports and pictures of their “academic adventures”,
it is always a pleasure to see the companionship and camaraderie, as well as the serious work  that our scholars discover in the meetings they attend. And it is always hard to decide which reports to highlight for our readers in Connections. 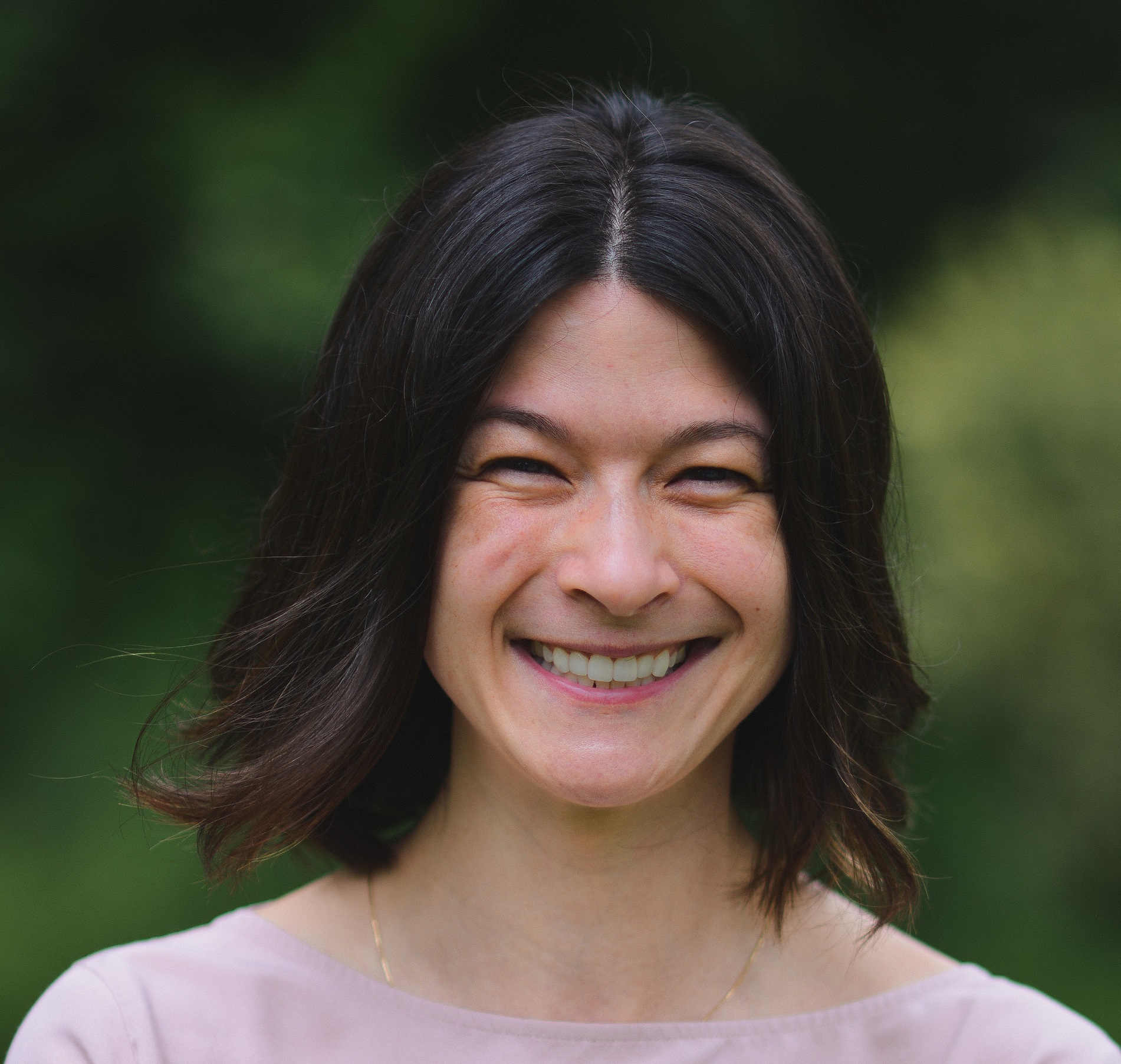 Alison, a PhD student in Computer Science in Durham, New Hampshire, interested in Automated Planning and Scheduling,  went to ICAPS in  Pittsburgh, PA in June,. Alsion wrote  to us “At the poster session, I explored ideas with senior researchers about where I could take my own research next, one idea of which it turns out I could roll into the research I am doing now during my summer internship at the U.S. Naval Research Lab. Then moments before he had to head out the door for a flight, I caught a researcher whose name I had been running into over and over again; I got his perspective on what the open questions are on a topic I keep coming back to, coincidentally just as my advisor joined the conversation. I could not have asked for a better introduction to the field. Thank you, ACM-W for the assistance.” You’re welcome Alison! We’re happy to make sure that women can have experiences like the ones you’ve described, of discovering new ideas and inspiration for their scientific work. 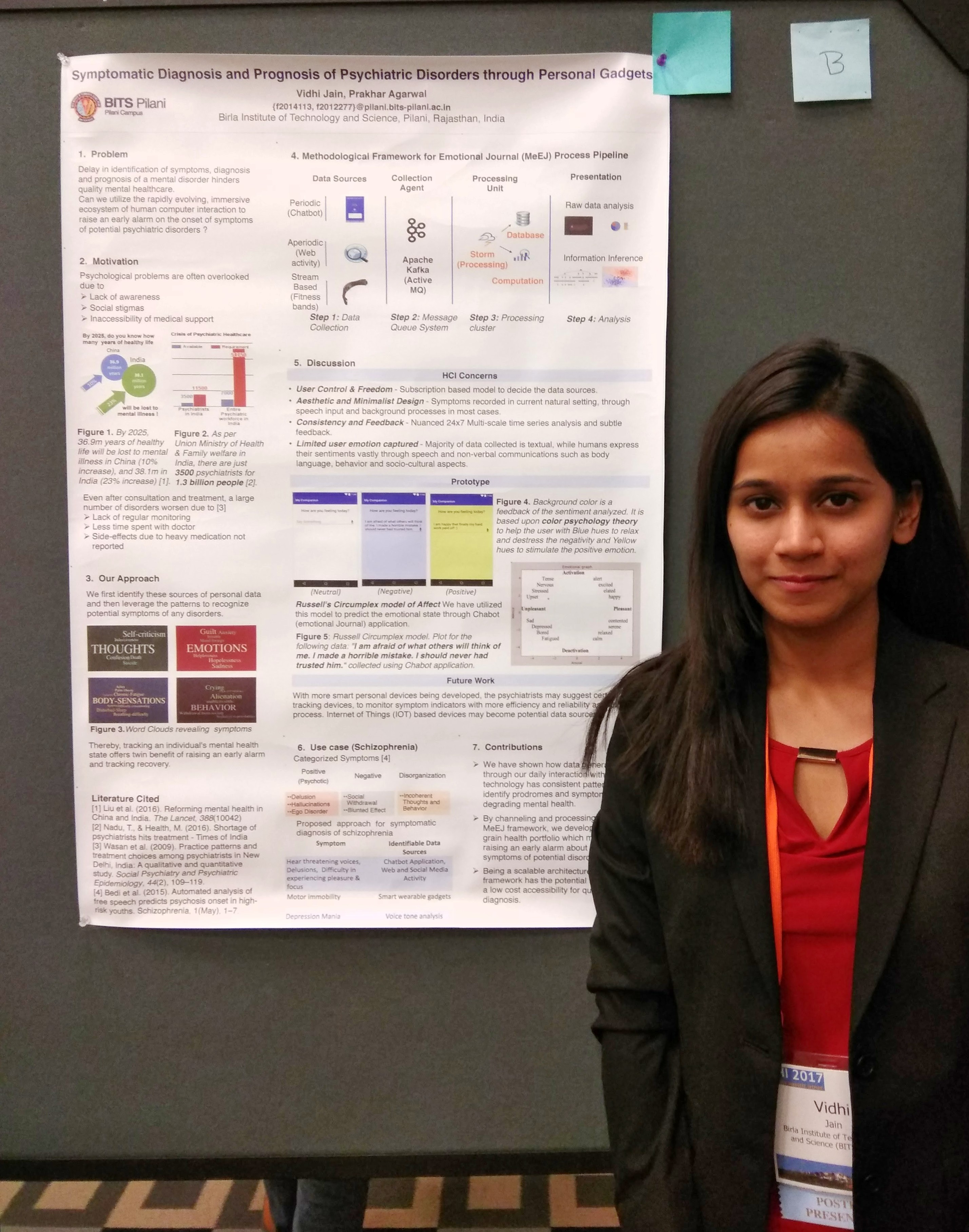 Vidhi,  an undergraduate student  from India, who looks very cool in her picture in Denver, Colorado wrote us “[…]Only a few students from top Indian design institutions were present, and that too without any support from their respective institutions. Since there were no immediate senior as a precedent so far, I want to encourage participation from the ACM and ACM-W Student Chapter in my campus. I shall discuss with these groups about the benefits of participation in ACM Student competitions and also about the scholarships or student volunteering opportunities available for attending such conferences.”  Vidhi presented her poster in the Student Research competition on Monday, 8 May 2017 on ‘Symptomatic Diagnosis and Prognosis of Psychiatric Disorders through Personal Gadgets’. 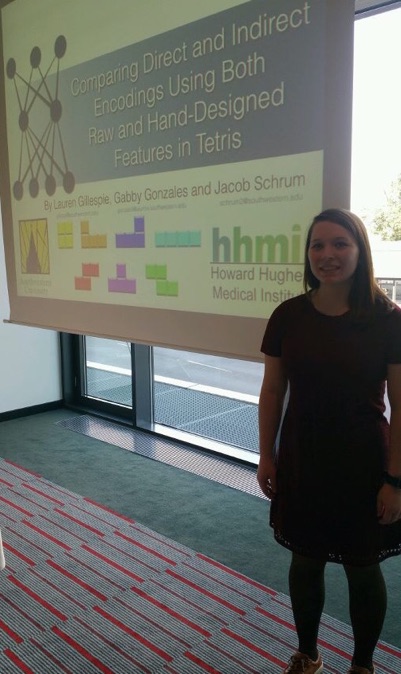 Lauren, another undergraduate student, who went to Berlin, Germany,  from  Georgetown, Texas, USA, said “Initially, I was nervous about attending since I am an undergraduate student and this was my first conference ever, but after e-meeting with my ACM-W mentor, Dr. Aniko Ekárt, and hearing about her experience and recommendations, I felt a lot more confident about how I would  get the most out of the conference and also enjoy my time there.[…] the first day of the conference included the Women@GECCO session, which was a fantastic experience. There, I was able to meet other women and hear about their experiences in research. […]After the tutorials and once the paper sessions began to get underway, my excitement for the conference only grew, as now I was learning about cutting edge research within my field. Also, I had my own new research to present to the community as well. My presentation occurred on the last day of the conference, and I was understandably very nervous leading up to it. However, once I got up in front of the audience and began giving my talk, everything became a lot less scary and my presentation went without a hitch.” Congratulations Lauren on giving your first presentation in an international conference, while still an undergraduate! We hope you all agree that Lauren looks very professional in front of her  huge slides, doing  her first presentation in public.

We would like to showcase more reports from  our awardees than we have space in the Connections eventually. Maybe we will be able to put all the reports in the ACM-W website some time soon.

The next application deadline is December 15 for conferences taking place in February—March, 2018.
For more information and to apply visit: https://women.acm.org/scholarships/.
If you have any questions, please contact  the scholarship committee chair Prof. Adriana Compagnoni, Adriana.Compagnoni@stevens.edu