As we swing into summer mode, it might seem that there would be little to include in our monthly newsletter. But that is hardly the case. While Celebrations and Chapter activity is reduced during the summer months, there is much activity in the ACM-W volunteer camp as we look toward the next academic year.

ACM-W Council
The annual ACM-W Council meeting was held at ACM headquarters in New York City in June. One major piece of business was to welcome our newest Council members:

It is my great pleasure to work alongside these new Council members and those who are continuing in their roles. The Council generated a lengthy “to do” list for the coming year and it will be fun to watch our ideas take shape.

Congratulations, Valerie!
ACM-W Past Chair, Valerie Bar, was honored at the ACM Annual Awards Banquet as the recipient of the Outstanding Contribution to ACM Award. Valerie’s work in ACM-W along with her continued commitment to promoting ACM membership and her work in the establishment of an ACM Diversity & Inclusion Council (coming July, 2018) make her a worthy recipient of this honor.

Thank you, Microsoft!
Microsoft has once again stepped forward in a big way to provide support for the ACM Celebrations project. Their $77,000 donation will provide $3,000 of support for each conference and additional administrative costs. On behalf of the Celebrations Committee and Celebrations organizers worldwide, THANKS!

ACM Celebrations
This month’s edition includes a report from the inaugural Ukraine ACM Celebration of Women in Computing, which was held May 22, 2017 and organized by the ACM Ukrainian Chapter and the Department of Theory and Technology of Programming, Kyiv National Taras Schvchenko University. Congratulations to the organizers on your successful event.

There is also a call for registration of 2017-2018 Celebrations. If you need more information about starting a Celebration, please contact Wendy Powley (wendy@cs.queensu.ca) and she will be happy to assist.

ACM-W Chapters
Incoming chair, Z Sweedyk, brings a greeting. You can also read about the first Best Officer Contest, which awards funding to attend an ACM Celebration or the Grace Hopper Celebration to the winners.

Women in Computability
ACM-W funds several projects throughout the year. This issue includes a report from the 11th Womein in Computability program, which we funded for the second year. ACM-W’s support enabled young researchers from across Europe to attend.

Volunteer Opportunity
If social media and supporting women in computing are your passions, ACM-W needs you! You can contact me via email (jltims@bw.edu) to explore this opportunity to join our ever growing group of volunteers committed to supporting, celebrating and advocating for women in computing.

A final note
As has become our tradition, there will not be a newsletter during the month of August. However, watch your email for an announcement of the unveiling of our new and improved ACM-W website!

I’m honored to be taking over as chair of the ACM-W Chapters Committee. It is more than a little daunting to replace the amazing Gloria Townsend, whose vision and leadership over the last 17 years has played a huge role in making the ACM-W the success it is today. Thank you, Gloria! We will miss you.

I am also happy to report we have successfully concluded our first Best Officer Contest, thanks to the efforts of Shahnaz Kamberi. We had 16 remarkable nominees and in the end chose two winners, Sarah Fillwock, Vice-President of the ACM-WIC at Michigan Statue University and Mahum Tariq, Vice-Chair of the Nust Chapter, Nust School of Engineering and Computer Science Islamabad, Pakistan. Both candidates demonstrated outstanding service to their chapters. Each winner will receive up to $2,000 in funds to attend a Celebration of Women in Computing or the Grace Hopper Celebration. Congratulations Mahum and Sarah!

ACM Celebrations of Women in Computing in Europe

The number of celebrations are growing every year. From July 1 2016 to June 30 2017 26 ACM Celebrations of Women in Computing took place worldwide and 9 of these were in Europe:

Thanks to all volunteers who gave their time and effort to organize these amazing events. We are hoping that this number will grow in the coming year. 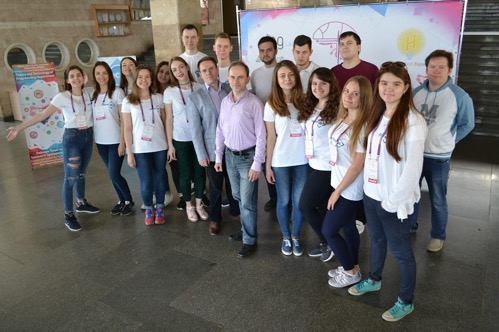 On May 22nd, 2017 the inaugural Ukraine ACM Celebration of Women in Computing took place. This event was organized by the ACM Ukrainian Chapter and Department of Theory and Technology of Programming, Kyiv National Taras Shevchenko University.

Prominent invited speakers included Vladyslava Rutytska who is the senator of Economic senate of the European Parliament, a member of HR Committee of EBA and a graduate of the Faculty of Computer Science and Cybernetics. She told the audience a story of her success as she is in the top 15 women-leaders of agro-business. Co-founder of Be Sure Healthcare B. V. and Ukrainian healthcare TPA Olga Chumakova gladly shared her experience and advice and provided insights as to how she made it into the InspiringFifty 2017 in the Netherlands.

The wonderful evening concluded with a quiz dedicated to historical technical women, an awards ceremony, and a performance by the talented musician and composer Mike Kaufman-Portnikov and his virtuoso playing the piano.

On 12th May 2017, ACM-W UK professional chapter organised the 2nd “INSPIRE Conference – Identity, Impact and Voice” in collaboration with ACM student chapter at University of Hertfordshire. The conference was attended by nearly 50 university students and academics from all over the UK. The aim of the conference is to encourage and recognise commitment to advancing the careers of women in STEM employment and research in Higher Education. This one-day conference provided a gateway to hear from world-leading speakers from academia and industries, showcase good practice, learn new skills and form networks of like-minded colleagues.

The event was a great success as evident from the stupendous feedback. When participants were asked about what they liked about the event, the unanimous choice were the inspiring talks by the keynote speakers and the panel discussion. Snippets of some very favourable comments are:
“All the speakers were very approachable!”
“The talks were inspiring!”
“The range of speakers and how they engaged students was outstanding!”
“The speakers were interesting and have made me think about doing things differently.”
“I could relate to Ruth’s cycle of perfectionism, it’s like being on a hamster wheel and going round and round and getting nowhere fast. I am inspired to get off and say no, my best is good enough!”

For a more detailed report and pictures, please visit the blog link here.

If you are considering organizing a Celebration in the coming year, it is now time to register your event by filling out this registration form. ACM-W provides financial support, handles finances, hosts websites and more! For more information, contact Wendy Powley (wendy@cs.queensu.ca), Chair of the Celebrations Committee.