Welcome to the April, 2017, issue of ACM-W Connections.

This month, the Celebrations Committee has a report from CAPWiC, the Capitol Region (Washington DC and Virginia) Celebration event. The Chapters Committee provides their monthly activity tip from an existing chapter.

The report from ACM-W Europe includes a report from the recent Celebration in Ankara, Turkey, and announcements of upcoming events and initiatives across Europe.

Our busy Celebrations season continues. An event in Azerbaijan is happening on April 15, and in the next few weeks we will have events in upstate New York; Belgrade, Serbia; Mallorca, Spain; and Hertfordshire, UK. We are truly global!

I recently represented ACM & ACM-W at the Computing Research Association Ctte. on Women (CRA-W) Grad Cohort event. Grad Cohort is a fabulous program that provides lots of information on skills needed for a successful graduate school experience. It is open only to students enrolled at U.S. and Canadian institutions. In a first step toward creating replica programs elsewhere in the world, ACM brought 4 observer groups from India, Australia, Spain, and Netherlands. Along with our CRA-W colleagues, we will be developing additional materials that will help guide these groups as they go home and start their own version of a program like Grad Cohort.

Continuing our global reach, we have a very exciting report from our ACM-W group in Uganda. While they are continuing to reach out to rural women in Uganda, they also report on an effort in Kenya, along with plans to do outreach in Rwanda as well. I hope you will read their report and check out the pictures they have sent.

From our friends at SIGHPC:
Do you know of students who are studying data science or computing applications, and who are either women or members of an underrepresented group? Please forward this information to them or to their academic advisors – it could be worth $15,000 per year to them.

Submissions opened March 15 for a new international program of graduate fellowships in computational and data science. The ACM SIGHPC/Intel Computational & Data Science Fellowships were created to increase the diversity of students pursuing graduate degrees in data science and computational science, including women as well as students from racial/ethnic backgrounds that have not traditionally participated in the computing field. The program will support students pursuing degrees at institutions anywhere in the world.

Interested faculty advisors and students can find more information on the fellowships, including a description of the online nomination process, athttp://www.sighpc.org/fellowships. Nominations close April 30.

Thanks for your continued support for and interest in ACM-W! 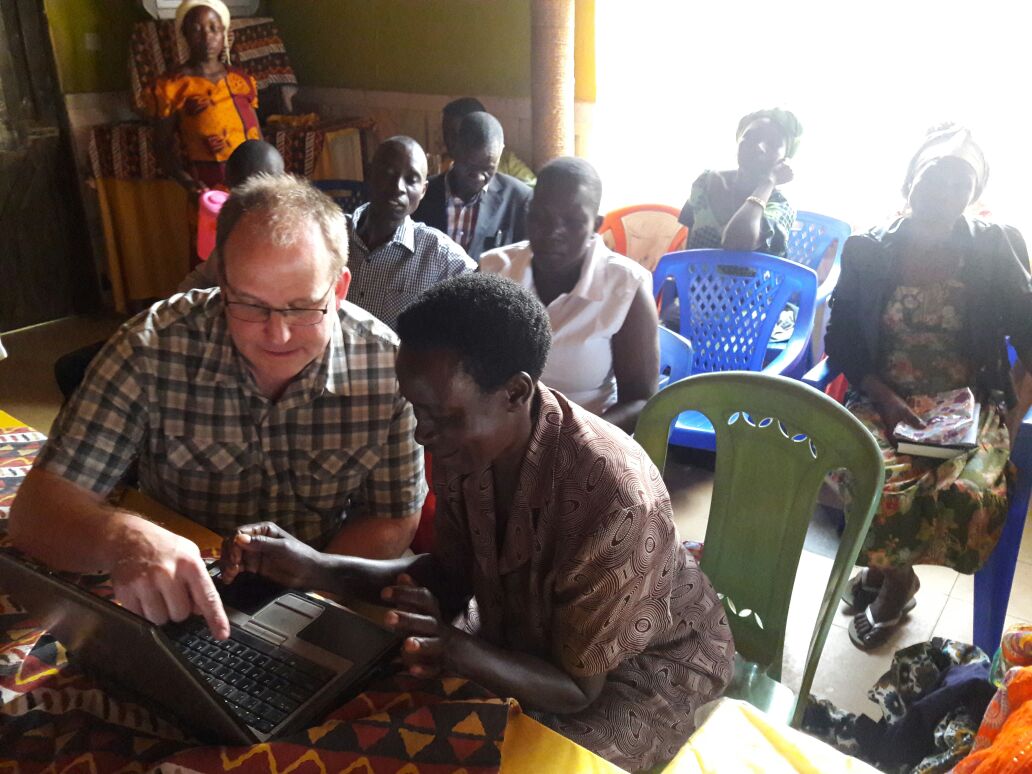 This February the ACM-W group in Uganda organized its first outreach into Kenya and, accordingly, was much welcomed by many rural women in western Kenya. This first, historical class was held outside the town of Malaba, Kenya, where many rural women, from various part of the region, traveled to attend the class.

ACM-W IN UGANDA APPEALED TO THE INTERNATIONAL COMMUNITY FOR COMPUTERS AND COMPUTER TEACHERS, AND GOT BOTH! 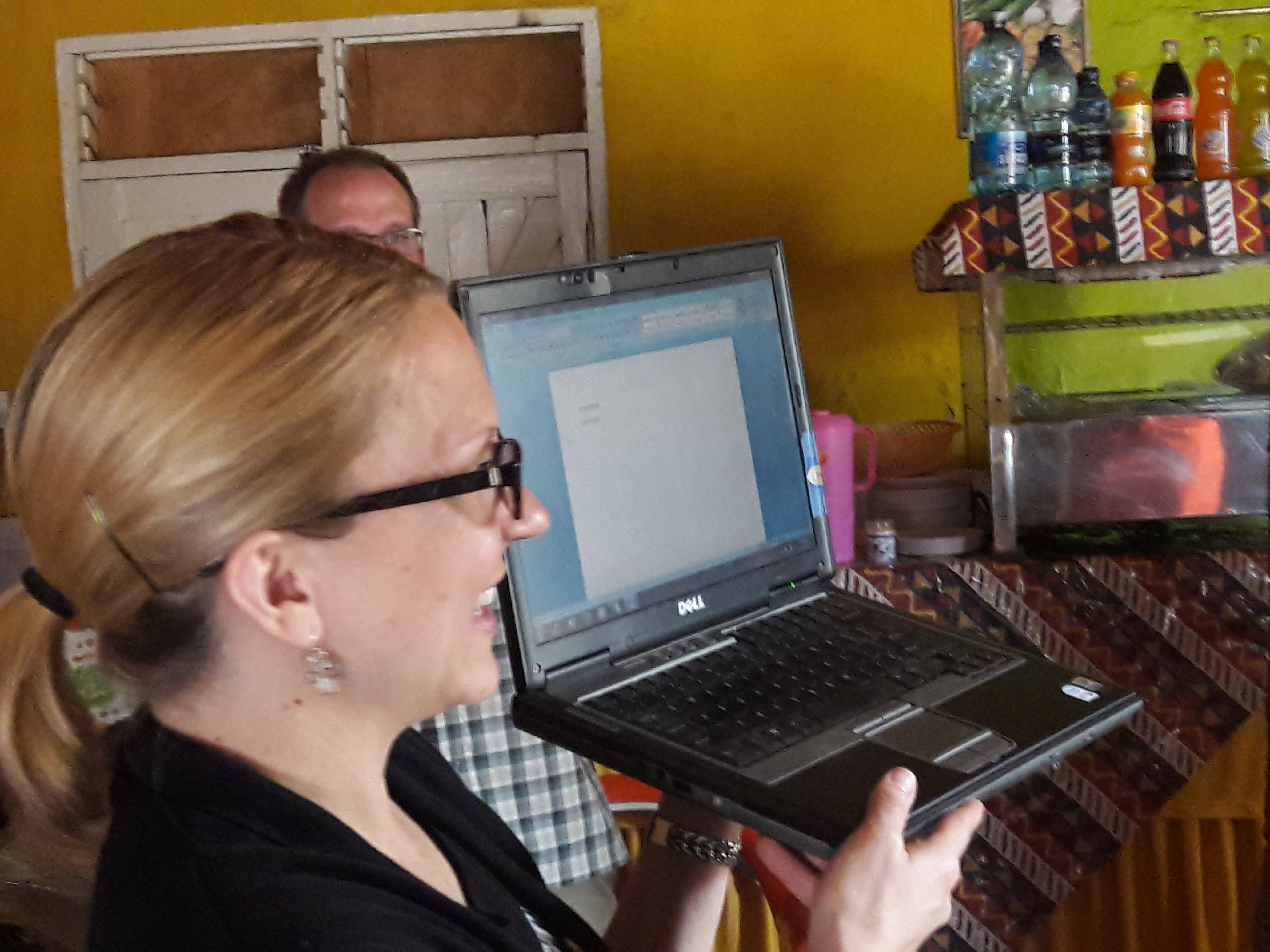 Following an appeal for aid in its effort to teach rural women computers, the ACM-W group in Uganda was able to get volunteers from Michigan, USA, who also carried three laptops for the effort. Erik Lovell is a computer and social media expert from Michigan. He traveled to Uganda with his wife, Vicky, both of whom taught women in both Ugandan villages and in Kenya. Erik told the women that they needed to learn computer so that they can connect with the international community for various opportunities. He further demonstrated that their villages are indeed connected to the internet when he called his virtual assistant on Skype in the presence of these Kenya rural women. The virtual assistant was in the Philippines. 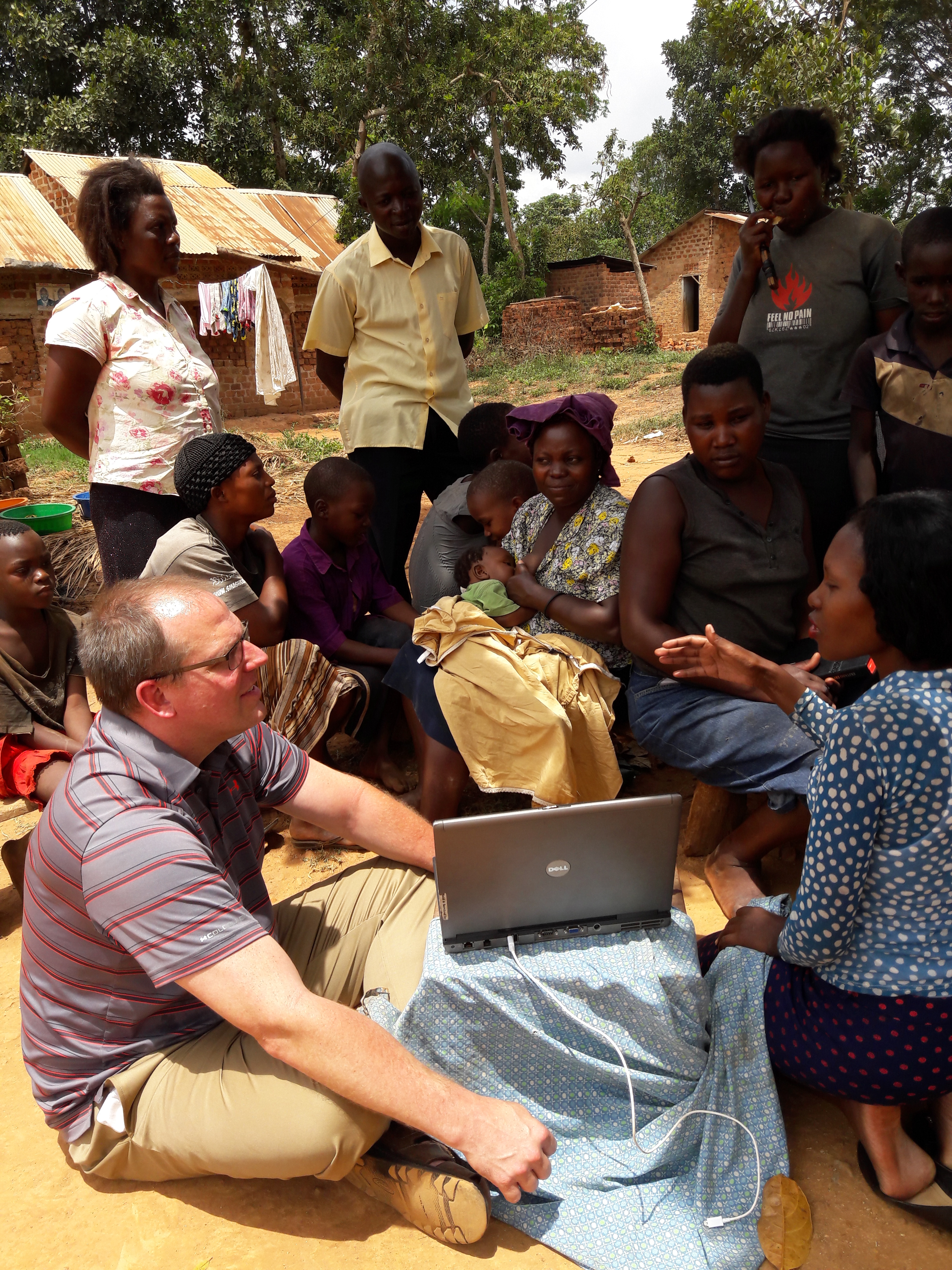 This was amazing to the rural women, who vowed to make computers part of the Kenyan culture, thanks to ACM-W. On the other hand, his wife, Vicky, got down to teaching the rudimentary computer skills to the rural women, that is, how to push the power button, how to open the computer applications, how to write, how to save, and how to shut down, amidst many questions from the Kenyan women, who had to talk through a translator, one Catherine, from Uganda, who traveled to Kenya with other volunteers to participate in this maiden class. 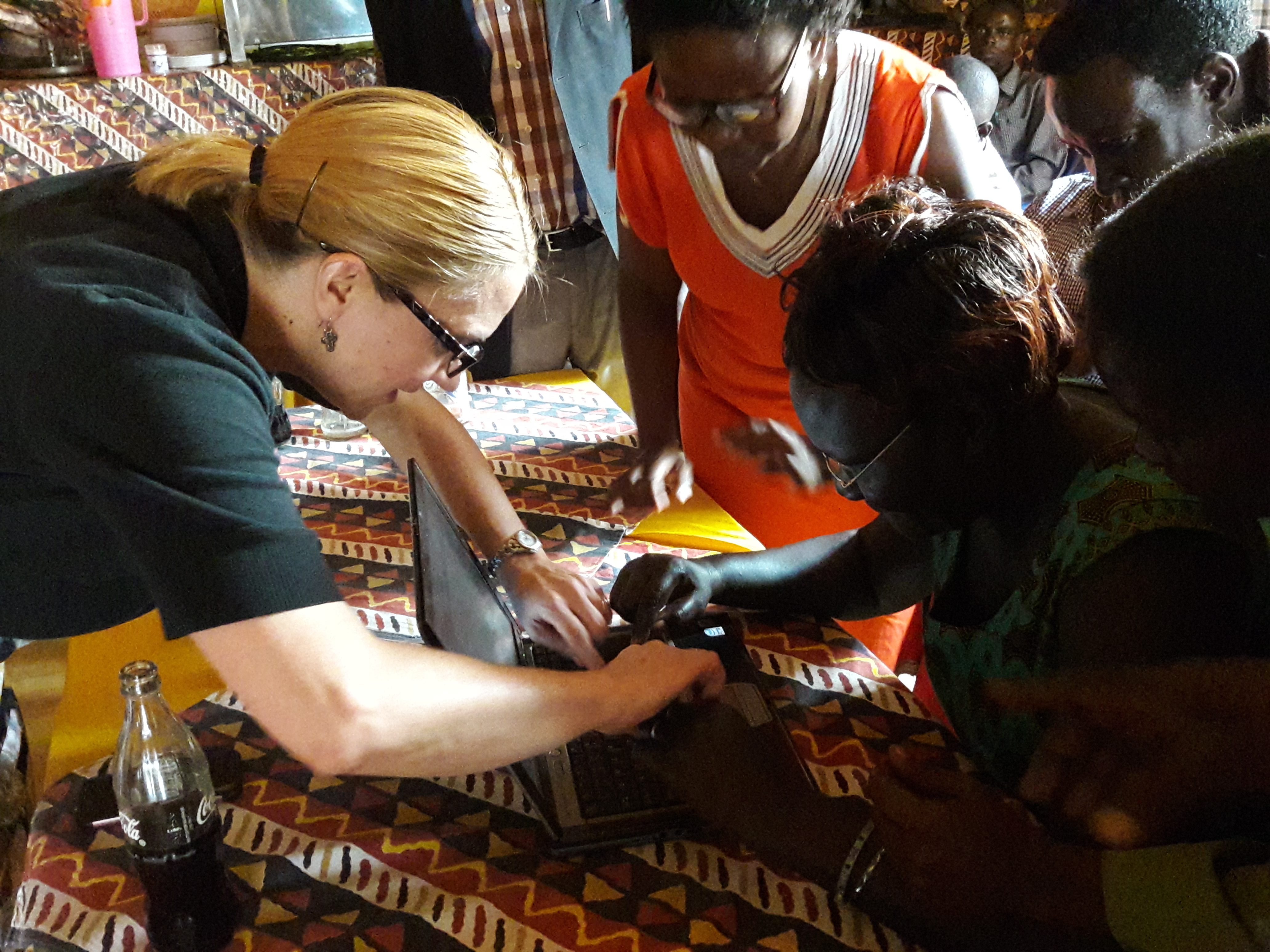 IN SUM, the chapter has been able to streamline its regular rural outreach in Uganda, and is now attempting to do so in Kenya, and is considering opening classes in Rwanda. The chapter will continued to drum up support internationally, locally, and from local governments for this noble effort. The chapter is grateful to the unwavering support it gets from Stawa University and from ACM-W Chair(USA). ( The photos were taken in rural Kenya and rural Uganda during ACM-W computer classes).

The ACM Capital Region Celebration of Women in Computing (CAPWiC) took place on February 24th and 25th at Georgetown University in Washington, DC. The conference co-chairs were Sharon Simmons and Farzana Rahman from James Madison University. 270 participants from academia, industry and government attended the event (a huge increase from the 40 who participated in the first event in 2012).

The event began on Friday noon with a campus tour of Georgetown University. The first keynote talk of the day was by Dr. Michellle Mazurek from University of Maryland, College Park who gave a talk on usable security. Friday afternoon was divided into multiple different parallel sessions, almost all of which focused on diversity and gender bias issues in computing and technology related disciplines. There was also an excellent panel on male allies and a research shorts session where graduate students presented their research work and received feedback from faculty members.

Following dinner and a “Day in the Life” keynote, a coding party and networking session was enjoyed by all.

Saturday started with an amazing keynote from Quincy Brown, former senior policy advisor at the White House. Following the keynote, flash talks were given by undergraduate, graduate and high school students and several technology-related sessions were held.

The poster session took place during the lunch hour. It was highly interactive and well attended. The posters were judged and later awards were given to the best poster from undergraduate and graduate category. There was also an honorable mention to a high school poster presenter.

The day concluded with a great panel on graduate school and various sessions on undergraduate research.

If you are interested in organizing an ACM Celebration, we can help you to get started! Please contact the Chair of the Celebrations Committee, Wendy Powley (wendy@cs.queensu.ca) for more information.

This was the first-ever Celebration of Women in Computing in Turkey. What makes that such a big deal? Well, ACM (the Association for Computing Machinery) is one of the largest organizations in the world in the field of computer science studies, and their Celebration event has been held all over the world for more than 25 years. More …

ACM-W Europe volunteer Mariam Kiran talked with Women in HPC (WHPC) organizers Toni Collins and Lorna Rivera to find out about the amazing work centered around the WHPC and what more can be done to improve female and minority representations in computing. Here they talk about their experiences in the HPC community. More …

Have you ever noticed the lack of women in academia? Are you aware of the gender imbalances and their implications at research institutions?

The consortium of the EU funded project EQUAL-IST is and aims to bring gender balance at Information Sciences and Technology institutions – which have been demonstrated to be among the research sectors most affected by gender inequalities at all levels – around Europe by implementing a unique approach. Find out more …