Welcome to the March, 2017, issue of ACM-W Connections.

Our first news item comes from OCWiC, the Ohio Celebration of Women in Computing. Along with a report on the recent event, the OCWiC organizers are also announcing the formation of the Ohio Community of Women in Computing. This will provide a way for women in computing in Ohio to stay connected throughout the year. We look forward to hearing much more from them as this effort moves forward.

The Chapters Committee has provided an interesting how-to article on a mentoring project being run by the ACM-W chapter at Drexel University. This projected was funded by the Google grant, managed by NCWIT, that focuses on increasing the number of U.S.-based ACM-W chapters.

The Scholarships Committee has sent in a report on the latest group of recipients. It’s a large group of students who will be attending a very interesting range of conferences.

The report from ACM-W Europe includes a report from the recent Celebration in Perm, Russia, and a list of the many upcoming celebration events across Europe. 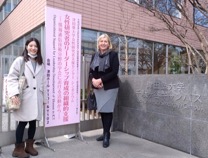 Finally, ACM-W was invited to participate in a one-day symposium at Tsuda College in Tokyo, Japan. They had received funding by the Japan Science and Technology Agency to promote women in research. We reached out to Catherine Lang, Associate Professor at La Trobe University in Australia. Catherine has had a very long involvement with ACM-W, and she was happy to accept our invitation to represent us at the event. Joined in a session by representatives from IEEE Women in Engineering and CRA-W, Catherine made a presentation about ACM-W. She reported that there was considerable interest in ACM-W activities, so hopefully we will see an increase in the number of chapters we have there.

Keep an eye out for an upcoming Celebration near you! We’re heading into a very busy season with events coming up in the Philippines, Kentucky, New England, Michigan, New York City, and Oregon & Washington – and that’s just between now and April 8. Thanks for your continued support for and interest in ACM-W! 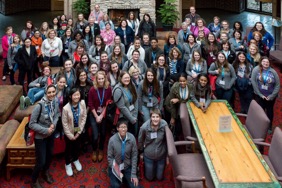 Two hundred women studying computer science at 40 universities and colleges across Ohio were among the record-setting 300 attendees of OCWiC 2017 who gathered at the Sawmill Creek Resort in Huron on February 24th & 25th. Community college, undergraduate and graduate students were able to connect with other female students, meet women mentors from industry, learn about career challenges and job opportunities, and advance their technical knowledge.

Keynote talks were highlights of the conference for many attendees. Dr. Margaret Burnett spoke about her 10 years of research on gender-inclusive software, specifically the GenderMag project. She is a Distinguished Professor at Oregon State University, an ACM Distinguished Scientist, and an ACM CHI Academy member. Ruthe Farmer’s talk was titled “Championing Change: Building the Movement for Computer Science for All”. Her career since 2001 has been focused on diversity and inclusion in tech and engineering. She served as Senior Policy Advisor for Tech Inclusion at the White House Office of Science & Technology Policy implementing programs related to President Obama’s call to action for Computer Science for All, and she previously served as Chief Strategy & Growth Officer and K-12 Alliance Director at the National Center for Women & Information Technology (NCWIT).

The two-day event offered a full-schedule of activities. Panel sessions focused on the diversity of career options for women in industry, academia and research. A career fair allowed students to talk directly with industry sponsors about internship and job opportunities. The student research poster competition was a way for students to showcase their research, exchange ideas, and improve their communication skills, while competing for prizes. Winners in the undergraduate and graduate student categories won scholarships to the 2017 Grace Hopper conference in Florida in October. Informal birds-of-a-feather sessions, workshops, and technical papers allowed students to learn about efforts to improve diversity, teach computer science to youth, and gain technical skills from their female peers. Friday evening events concluded with a dance party, complete with games and a photo booth.

OCWiC 2017 concluded with an announcement of the formation of a new project, the Ohio Community of Women in Computing. This new community will serve as a resource and clearinghouse for companies, schools, and clubs that want to broaden participation in computing and provide ongoing activity and support for Ohio women in computing between Celebration events. Learn more about this exciting new venture by visiting our website, http://www.ocwic.org.

The ACM-W Scholarship for Attendance of Research Conferences program provides support for women students in Computer Science and related programs who wish to attend research conferences.

This time around we have the pleasure to congratulate eight scholars who are going to conferences in the early Spring! We offer our congratulations to Brooke Bullek, Alisse Harkins, Mozhdeh Ariannezhad, Vidhi Jain, Li Chang, Naomi Dassi Tchomte, Hyunyoung Kim and Meg Nidever. Alisse, Brooke, and Vidhi are undergraduate students. Mozhdeh, Li, and Meg are master’s students, and Hyunyoung and Naomi are pursuing PhD studies. The conferences chosen also are diverse, from Software Engineering (Alisse Harkins) to Information Retrieval and Enterprise Information Systems (Mozhdeh Ariannezhad and Naomi Dassi Tchomte) with the usual high proportion of Human-Computer Interaction and Social Computing (besides four scholars going to CHI 2017, one going to WWW2017). Well done every one!!! We hope you all will have plenty of fun, and learn a lot at your conferences.

The next application deadline is April 15 for conferences taking place in June and July 2017.
For more information and to apply visit: women.acm.org/scholarship. If you have any questions, please contact the scholarship committee chair Prof. Adriana Compagnoni, Adriana.Compagnoni@stevens.edu

In 2017, we begin a new series about activities that our ACM-W Chapters organize – activities that are easy to organize and that can inspire other chapters to duplicate the ideas. March’s activity involves organizing a mentoring program for any ACM-W chapter. Start by constructing a form (electronic or paper) where students can select if they want to mentor or to be mentored. Add at least a blank for students’ year in school and space for their interests. Launch the program with an event where a small panel of two mentoring pairs describes the benefits of the relationships and gives tips for duplicating the successes of their own experiences. Distribute the mentoring forms at the event. Then match older students who want to mentor with younger students who want to be mentored by examining their similar interests. Ask students for a commitment of at least one meeting per month per semester. Send a monthly reminder to the mentors, providing a sketch of a topic to discuss. For example, as registration approaches, ask each mentor to discuss her mentee’s choices for classes and to provide her own advice (to supplement the advice of the adviser) about class selection.

On this International Women’s day it is important to recognize women and men around the world who support the betterment of women world-wide. Whether in any of the many countries in the world, anyone supporting women and making their lives easier and more productive should be hailed as heroes. For all who are fighting to improve women’s lives and the future of all the young girls that will become women, I salute you. Keep going, keep fighting, one day we will overcome everything that holds us back.

In addition to the ACM Celebration of Women in Computing: womENcourage 2017, ACM sponsors smaller regional events. This is one way for women to gain positive influences and to have men understand the issues behind the low number of women studying and working in STEM fields, especially in Computer Science or Information Technology. These events supported by ACM-W, Microsoft, and ACM Chapters allow women and men to discuss the issues and collaborate on solutions.

I was lucky enough to participate in the event from 1-3 March in Perm, Russia. It was an exceptional opportunity for me to see first hand such an event and to learn about this very interesting place and the culture.

The plenary lecture was presented by Bev Bachmayer, Vice Chair of ACM-W Europe, who gave an overview of ACM worldwide, ACM-W Europe, talked about why she joined ACM and why the students should join ACM. Ulduz Khalilov, representative of ACM-W Chapter in Azerbaijan, spoke about the ACM-W Chapter that she leads in Azerbaijan and why it is important to start and maintain a Chapter.

Galina G. Scheremet told about the decrease of number of women in computing since 1984. She also discussed some reasons on why this has occurred and what can be done to improve it.

Dinara Gagarina, Associate Professor of Perm State University and chief editor of the portal “Interesting Robotics” also stressed the importance of women being in the computing professions and told about projects in this field, realised for girls in Perm.

After many interesting talks during the first day, we were able to see the robots from one of the local robotics classes.

The second day included several talks in the morning detailing research about women in computing. Following the presentations began a student contest where 15 teams from local universities worked together to complete multiple designated problems. At the end of the day the results were graded and the winners were announced, half of them were girls. In general, about 100 students from different universities took part in the student contest.

In the next few months many such events will take place across Europe, see below the overview of one such event and the list of events that are planned across Europe. These events are effective because they are smaller and more intimate, generally presented in the local language and closer to where the participants live and work. This affords the opportunity for more people to attend at much lower cost for the participants.