Welcome to the October, 2016, issue of ACM-W Connections.

Busy as ever, we have news this month from the ACM Celebration and Hackathon in Goa, India. Our People of ACM-W team has interviewed A.J. Brush, currently co-chair of CRA-W. There’s also news from the Chapters Ctte. and from the Rocky Mountain Celebration event.

There are a few upcoming events I want to make sure our readers know about:

If you will be at the Grace Hopper Conference, please stop by our booth to say hi. We will have a number of stalwart ACM-W volunteers there!

A.J. Brush is a Principal Researcher at Microsoft currently on loan from Microsoft Research to the Windows product group. She is well known for her research in Human-Computer Interaction (HCI), with a focus on ubiquitous computing and computer-supported collaborative work (CSCW).

Currently Co-Chair of CRA-W, Brush is also a Senior Member of the ACM and has received several recognitions, notably a “Borg Early Career Award” in 2010, two “Best Papers” awards, and several “Best Paper” nominations. Brush serves on the UbiComp Steering Committee and was co-general chair of UbiComp 2014. She also serves regularly on Program Committees for many conferences including UbiComp, Pervasive, CHI, and CSCW.

This month, we feature A.J. Brush in our People of ACM-W series. Read the interview here.

The ACM Rocky Mountain Celebration of Women in Computing was held in Salt Lake City on September 22 – 23 at the RL Hotel. The celebration included a track for high school women and one for professional women. The high school track was so popular that students were turned away as the conference reached capacity. The interaction and synergy between the groups was even better than expected. Total attendance was 282 with students from 13 colleges and universities and several local high schools. Thursday evening the high school track featured a College Fair with 16 exhibitors. The College Fair was also well attended by college students looking for graduate schools. The Friday career fair featured 19 companies set up to speak with attendees and to collect resumes. The Career Fair was the closing session for a successful event that included two key note speakers, Julie Lerman and Cydni Tetro, workshops for interviewing and resume writing, paper and poster presentations, panel discussions and two “un-conference” sessions entitled “How to Deal with Inappropriate Responses and Behaviors in the Workplace” and “Work Life Balance”. Other popular sessions included a Mentoring Breakfast on Friday morning and different virtual reality experiences set up by one of the sponsors during the Thursday evening “Games and More”.

Here is a picture of the group:

If you would like more information on any of these events or would like to organize an event in your area, please contact Wendy Powley (wendy@cs.queensu.ca). We can help you get started!

This month, we congratulate our ACM-W Chapter, University of California, Irvine that won an NCWIT Student Seed Fund Trailblazer grant ($15,000), during the second round of Google-sponsored funding.

University of California, Irvine will identify undecided/undeclared students and target them via emails and other means of communication to encourage students to apply for their mentoring program. Once accepted into the program, students will benefit from the “community” via mentoring, tutoring, workshops, and a tour at a technical company.

Congratulations to our sister ACM-W Chapter! The deadline for round three of Student Seed Fund awards is November 1, 2016. Schools that are members of NCWIT’s Academic Alliance can apply for funding at https://www.ncwit.org/programs-campaigns/ncwit-awards/ncwit-student-seed-fund

The ACM Celebration of Women in Computing was held on the 24th September 2016 at Goa University. The goal was to connect technical women who are working / studying within this particular geographical location. The program began by the traditional lighting of the lamp by the dignitaries. 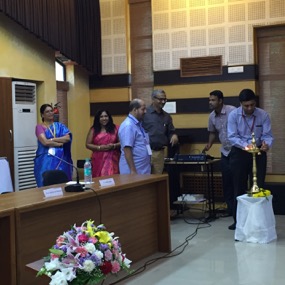 The Keynote address was delivered by Prof Madhavan Mukund, President ACM India and Dean of Chennai Mathematical School, Madras, on Computing as a Mathematical Science. He spoke about how Math is fundamental to Computer Science and illustrated the concept with many examples. He said that key to quality research is awareness and appreciation of the mathematics underlying computing.

This was followed by a Panel Discussion chaired by Dr. Sheila Anand, Professor of Computer Science, Rajalakshmi Engineering College, Chennai. The topic for discussion was “Creating Conducive Environment for quality research in Indian Universities”. The Panel members were Madhavan Mukund (Chennai Mathematical School), Dr.V V Kamat, Professor, Computer Science, Goa University, Dr. Veena, Professor, NIT Goa and Dr. Pandurang Kamat, Chief Architect, Innovation and R&D, Persistent Systems, Goa. The discussion was very extensive and discussed among others: the need to provide the right atmosphere for quality research; the importance of attending and presenting at Conference to understand current and emerging technologies and the significance of Quality Journal publications.

In the afternoon session, there was a Technical talk on “BlockChain Technology” by Dr. Pandurang Kamat. He spoke about how Blockchain technology brings together a confluence of known concepts in Computer Science in a very unique way, thereby enabling new kinds of applications. It allows for maintenance of a shared distributed ledger (also known as the blockchain), which can be simultaneously read and modified by all involved parties but is not owned by any party.

This was followed by Prize Distribution to the winners of the Hackathon contest which was sponsored by Oracle Academy. The students of the Computer Science Department of Goa University entertained the audience with a Cultural Event which was followed by Dinner. 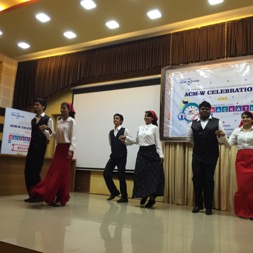 Goa University hosted the First National Level 24 Hour Hackathon for Women organized by ACM-W India and Oracle Academy on the 23rd -24th September, 2016. The aim of the event was to provide an impetus to women students to take part and display their innovation and coding skills.

The Hackathon was announced on 20th July 2016 and the last date for the registration was 30th August 2016. 71 teams from all over India registered for the event, with each team comprised of 3 members. For the first round, participants had to create innovative projects on the theme “Tech for Public Good”. It was an open platform application development and it was on the participating team’s discretion whether to develop a web application or mobile application or any kind of software on the provided theme. The initial Themes that were provided were waste management, transport, tourism, education, women and child safety, smart city and e-governance. The projects were reviewed by the expert committee and 25 teams were selected for the second round. 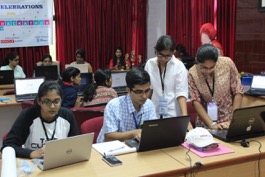 The second round was a Skype interview round which was held at centers Nagpur, Pune and Goa (2 Judging Panels) in India. The students were interviewed by an eminent panel of 5 Judges at each center and 11 Teams were selected for the finale to be held on September 23 – 24th.

The Final round started on 23rd September 2016 at 3.00 pm and continued for the next 24 hours. For the Finale, the theme provided was Educational Technologies. The teams were pre-assigned mentors from industry and academia. At the end of the Hackathon each team was given 5 minutes to present their end product. The winning teams were selected by an eminent panel of judges. The prizes for the event were sponsored by Oracle Academy. The Winners of the First National Level Hackathon for Women were: