This month’s issue of ACM-W Connections contains a report from our Michigan Celebration of Women in Computing and a number of reports from ACM-W Europe.  Many of these include information about womENcourage, the ACM-W Europe Celebration event that will take place in Uppsala, Sweden, in September.  We hope that many women in computing from around Europe will join us for that event, so check out the registration information, sign up, and pass it along.  It promises to be a fantastic event.

The Michigan Celebration of Women in Computing Holds its Fifth Event

On March 20th and 21st, over 220 women convened on the University of Michigan – Ann Arbor campus for the Fifth Michigan Celebration of Women in Computing (MICWiC 2015).  Geared primarily for undergraduate women in computing fields, the event was organized by women from nine Michigan colleges and universities and two Michigan-based companies.

The conference started on Friday, March 20th with a poster session, a banquet, and a keynote entitled "Talking to R2D2" by Dr. Joyce Chai from Michigan State University’s Department of Computer Science and Engineering. As stated by one attendee, “[Joyce] was clearly an expert in her field and displayed passion in her academic and out-of-work activities!”  Friday evening also featured two Birds of a Feather Sessions and speed interviewing.

The following day started with a keynote from Heidi Musser of USAA on leadership, diversity, innovation and transformation.  The talk was very well received. One student commented, “[Heidi’s] talk motivated me to not be afraid of the difficult tasks in the future. It was refreshing to not have to ‘be perfect’ as I feel I have to in classes a lot. The focus here was on learning and that was good and the way things should be.” 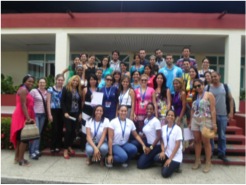 Girls Day in Germany — Workshop on Programming for Kids

On April 23rd, Girls Day in Germany,  Intel GmbH in Munich Germany opened their doors to 40 students to demonstrate opportunities in the computing field.  I was lucky enough to be able to teach 10 of the 40 girls the basics of computer programming as one of the workshops during the day.  We used Ardublock with Arduino attached to Intel Galileo boards, breadboard, and wires to program a Galileo board with led lights blinking like a stoplight.   The girls attending the workshop were very positive about what they learned and how easy it was to program the board.  I am hoping this workshop will encourage them to do more programming and learn more about STEM studies.

We are repeating this workshop for kids at ACM-W Europe womENcourage Celebration of Women in Computing. You can see in the above picture the program they wrote and how Ardublock changed it into code which was downloaded and executed on the processor.
The duration of the workshop at Uppsala will be 3 hours. Young minds are free to create a variety of prototypes using LED’s, wires and other small hardware components. It’s time to sign up for the workshop and start thinking of what you would want to create.

For those who are teachers or parents, the workshop is easily reproducible. If you are interested in duplicating this kids programming workshop for your students or children, send an email to bbachmayer@gmail.com.

Make something that will improve the world for someone less fortunate than you are.  ACM-W Europe and Codess Hackathon, sponsored by Intel® and Microsoft, will be held in Uppsala, Sweden, on September 24th 2015, in conjunction with womENcourage 2015 Celebration of Women in Computing. The challenge is to build innovative and exciting projects which improve the day-to-day lives of people using the Intel® Edison Development Board and the Intel IOT DevKit.  Your resulting project could be anything that will help humanity.

All you need to bring for the hackathon is your laptop. We will provide the computing supplies, food and drinks.