Welcome to the October issue of ACM-W Connections. And what an exciting month it has been since our September issue! This issue includes a write-up about the ACM-W Celebration event in Goa, India. We have a very interesting article about the “applauds project” at Lawrence Livermore Lab, a project that should be replicable elsewhere. We also have a report from a group of very committed high school students in Mason, Ohio, who put together a summer camp for middle school girls.

I’ve just come home from the Grace Hopper Celebration of Women in Computing. Amazingly, I have now attended 13 of the 14 GHCs that have taken place, including the very first one in 1994. As some of you reading this already know, the conference was huge this year! There were 8000 attendees, over 2800 students from 441 schools, and attendees from 67 countries. The exhibition hall was a beehive of activity and we had a lot of traffic in the joint ACM/ACM-W/ACM CCECC/CSTA booth, making lots of great contacts amongst our various constituencies.

We have some very exciting news that I announced first at the Hopper conference. ACM-W is working with Mentornet with a goal of getting at least half of all undergraduate women CS students in the U.S. mentored via the Mentornet platform. Microsoft Research is supporting this effort by providing funding to Mentornet and encouraging their staff to sign up to be mentors (though we fully expect that mentors from many many companies will eventually be needed). We will be sending our ACM-W student chapters information on how to join and sign up for a mentor. If you know of an ACM-W chapter that has lapsed, encourage them to sign back up so that they don’t miss out on this opportunity.

In a last note about the Hopper Conference, I would be remiss if I did not address the uproar about the remarks made by Satya Nadella, CEO of Microsoft. In case you missed it, in response to a question asked by Maria Klawe (president of Harvey Mudd College and member of Microsoft’s Board of directors), Nadella said that women should not ask for pay raises (in truth, he said nobody should ask for raises, but Maria’s question was specifically about women). He said he trusted in the review system, and that if someone’s work is good it would eventually be rewarded. As you can imagine, the conference and the web lit up, followed soon thereafter by all other forms of media as well.

Here are my thoughts on this matter:

Thanks, as always, for supporting ACM-W and women in computing. We still have a ways to go in our efforts.

Research Focus: Learning Game Design Characteristics through the Study of Flow and the
Elemental Tetrad in the World of Warcraft & Minecraft. By Dr. Quiana Bradshaw, DCS

The ACM-W Chapters project leaders met many chapter leaders at the Grace Hopper Celebration of Women in Computing. One woman told us to give Zarina (at ACM Headquarters in New York City) a big hug for all of the help with setting up her chapter. Remember that ACM @NYC can give you one-on-one help in chartering a chapter, in writing the brief annual report, etc. In fact, there is a wonderful one-on-one webinar for all new chapters. For more information, email chartering@acm.org.

All India Celebrations of Women in computing conference at Goa University on 26th September.

Dr Satish Shetye, Vice-Chancellor, Goa University inaugurated the All India Celebrations of Women in Computing 2014 conference organized by ACM-Goa in association with ACM-Women India and Goa University on 26th September at 9.30 am at the conference hall of the Goa University.

ACM-W aims to support, celebrate and advocate full engagement of women in computing across the globe. It facilitates women’s academic and professional journey in the field of computing through mentoring or role modeling and works with the ACM community of computer scientists, educators, employers and policy makers to improve working and learning environments for women.

This event is ACM-W Goa’s first ever Regional Celebration of Women in Computing. This one-day celebration had several intellectually enriching opportunities for women students and professionals in the field of computing. It brought together a unique opportunity of collective learning, interacting with world class researchers and peers and discussing the work-in progress research to an enlightened audience and getting their valuable insights. 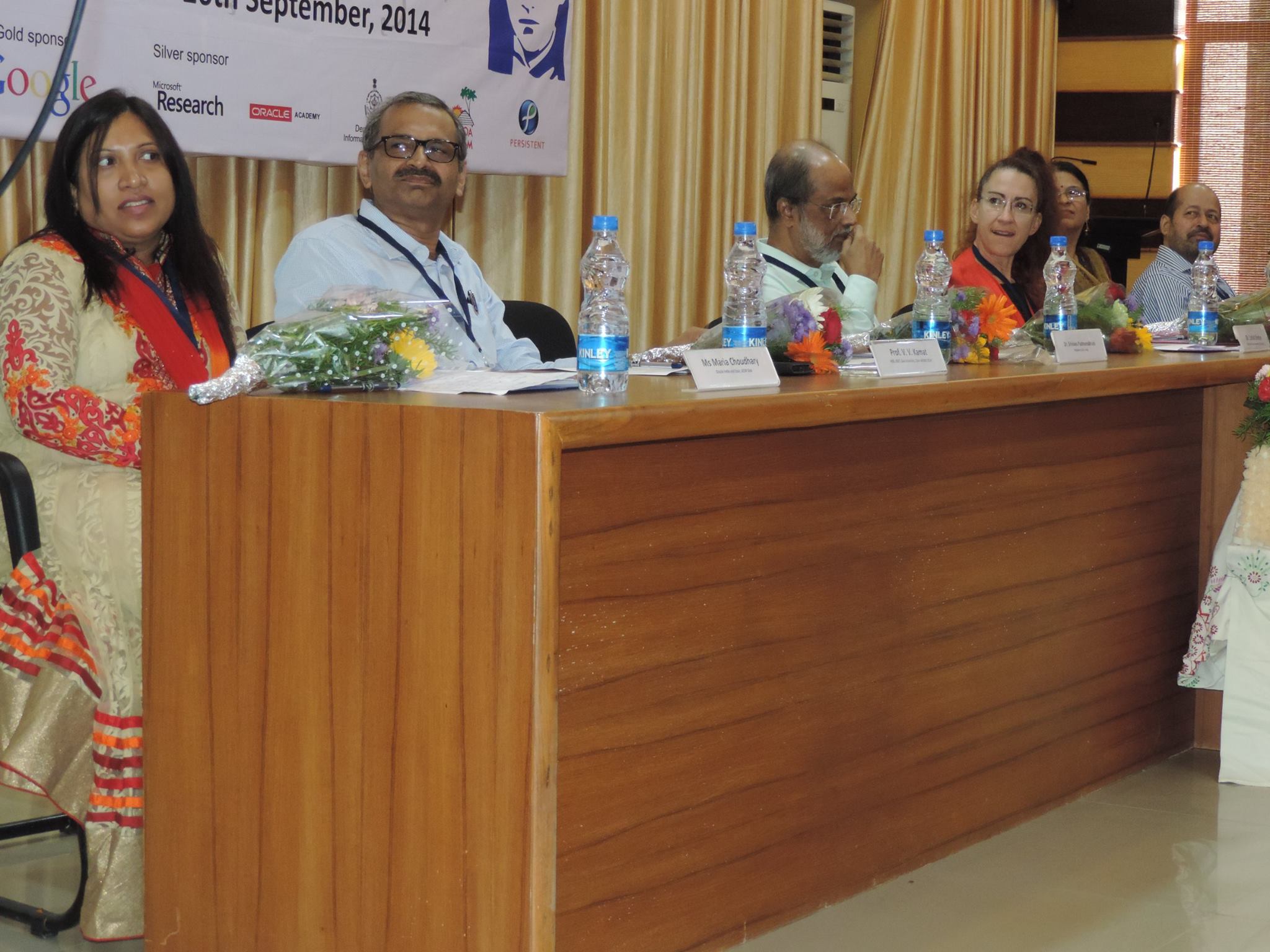 Dr Silvia Giordano who is an ACM Distinguished Speaker and professor and head of the University of Applied Science, Switzerland delivered a keynote address on Mobile Hoc Networking: Cutting edge Directions. This was followed by a Tutorial on Visualization by Jaya Sreevalsan Nair, International Institute of Information Technology – Bangalore (IIIT-Bangalore). Rashmi Mohan,of Yahoo! Labs talked about ‘What does my machine learn about me?’.

Dr Arati Dixit, Savitribai Phule (Pune) University spoke on the “Life and Work of Shafi Goldwasser”. This was followed by Work in Progress Presentations by a eminent group of researchers.

Dr. Nutan Limaye, IIT Bombay enthralled the audience with her lively talk on “Theoretically speaking: The Why and How of Efficient Computation”.

The chief guest at the closing ceremony, Prof. Vijayendra P Kamat, Registrar, Goa University, presented the prizes to the winners of the first Lady Ada National Programming Contest for girl students that were held as part of this conference. The Lady Ada National Programming Contest was sponsored by Oracle Academy and held in collaboration with ACM India and ReliScore. 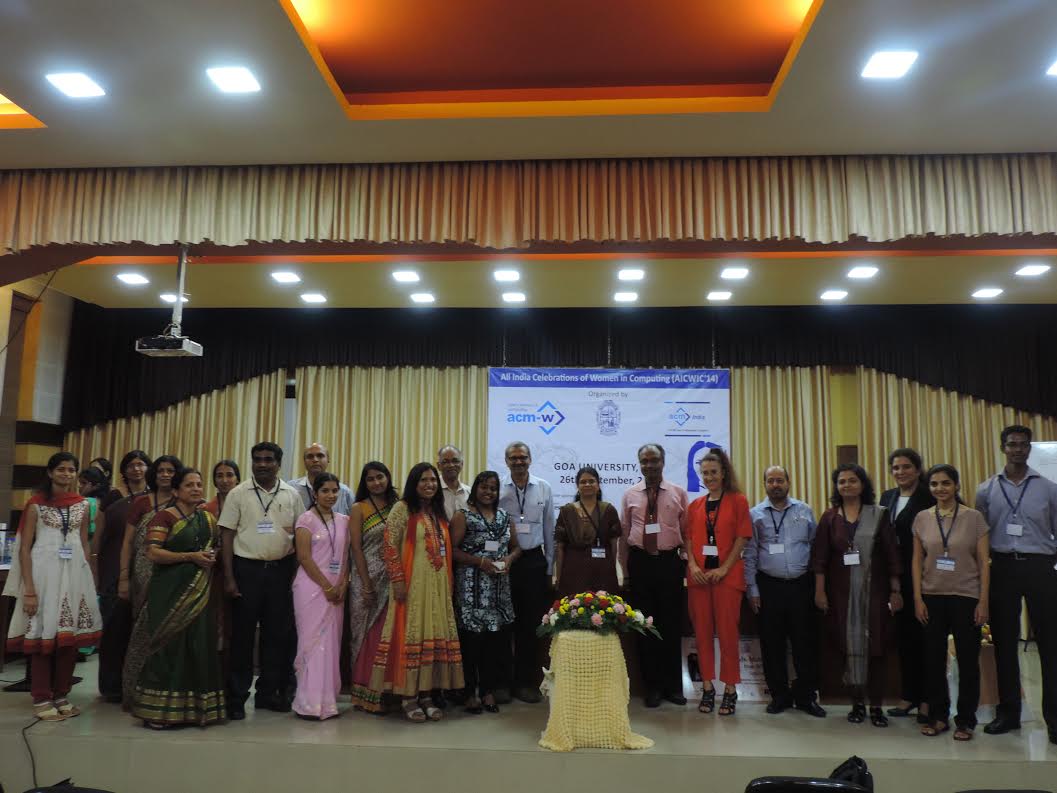